Book, Music and Lyrics by Paul Gordon
Jane Austen's deliciously charming romance is full of wit, passion and now, glorious song. This world premiere musical from Tony Award®-nominated composer Paul Gordon was specially commissioned by CST for the 2014/15 Season. Under the masterful hand of Artistic Director Barbara Gaines, beautiful melodies trace the lives of Elinor and Marianne Dashwood—two sisters whose fortunes change following their father's untimely death. One cool and deliberate, the other consumed by youthful passion, their quest for suitable husbands unfolds in a period-perfect production that will set your spirits soaring. Winner of the 2015 Jeff Award, Best New Work, Musical. 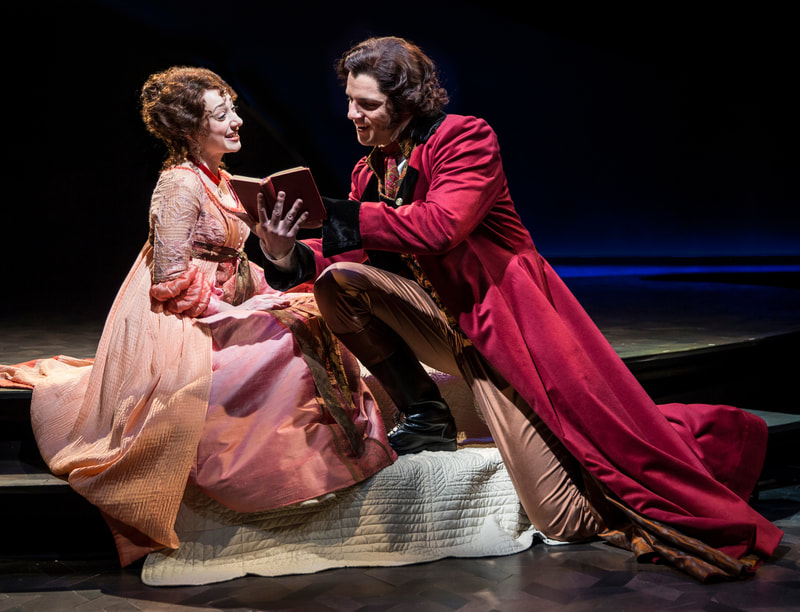 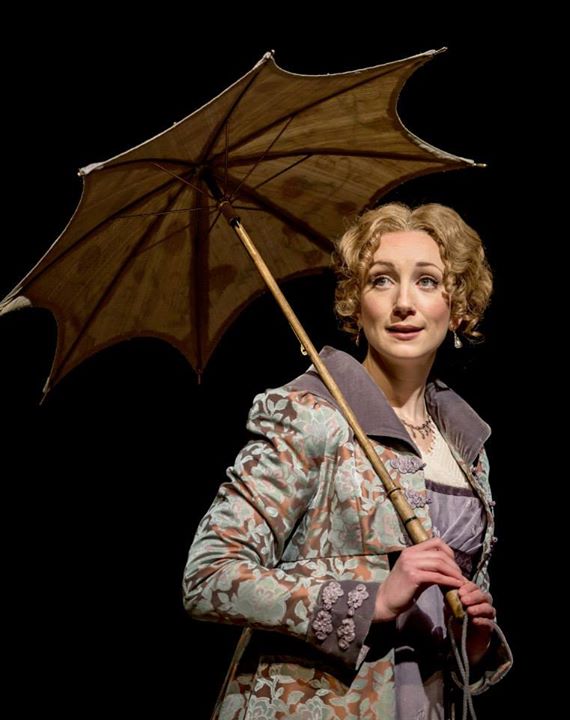 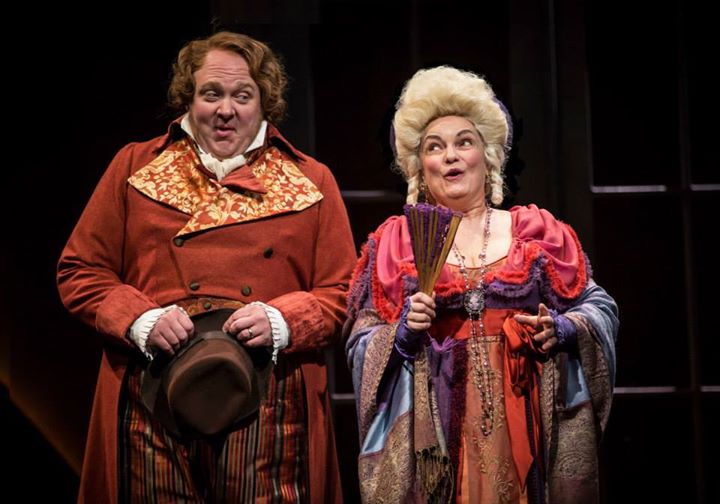 "TRULY MASTERFUL" -- Around the Town Chicago

"A SUBLIME WORK OF ART" -- The Daily Harold


“Highly recommended... a flawless world premiere! Austen’s prose has been so seamlessly expanded into song that it is often difficult to know where language ends and music begins. But that is only one of the many charms of this beguiling new show that bursts with both wit and heart. Developed in collaboration with Rick Boynton, and impeccably cast and directed by Barbara Gaines (who is at the very top of her game here), this musical also serves as further proof that, as with Shakespeare’s plays, there is no need to ‘update’ Austen because the story deals so deftly with such eternal matters as love, loss, money, family relationships and that enigmatic thing we call ‘chemistry.’ Each of Gordon’s two dozen songs is a beauty. Laura Bergquist, the superb music director and pianist who leads an orchestra of 10 from a balcony above the stage, reveals the full allure of Gordon’s score. It is not often that a new musical arrives in such pristine form. Credit the book (both the Austen original and Gordon’s, which is a model of the form), and the music, which adds great heat to Austen’s light. This production could be sent directly to Broadway, or ‘home’ to London, without the least bit of tinkering. ” Chicago Sun Times

“Nothing less than sublime... it is a match made in musical theater heaven! Before the orchestra plays a note of composer/lyricist Paul Gordon’s exquisite score. Before Sharon Rietkerk and Megan McGinnis delight with their winning performances as the sisters Dashwood. Before a single scene unfolds in Chicago Shakespeare Theater’s world premiere of Sense and Sensibility, the musical adapted from Jane Austen’s novel, the audience encounters the simple elegance of Kevin Depinet’s set. It’s dominated by an intriguing, distinctly feminine sculpture that unfurls from the stage to float over it like a ribbon, or a wayward curl escaped from a lady’s coiffure. Commissioned by Chicago Shakespeare, developed with creative producer Rick Boynton’s invaluable assistance and masterfully helmed by Gaines, this entire production is a sublime work of art. Which isn’t that surprising considering its pedigree. Older sister Elinor (the graceful, winningly expressive Sharon Rietkerk) is cautious and reserved, while the younger Marianne—played with endless passion by the very charming Megan McGinnis, co-star of Northlight’s Daddy Long Legs—is fiery, impetuous and outspoken. One of the show’s great joys is the absolute authenticity of their performances, how perfectly the voices of these superb singer/actresses complement each other and how well their delicate singing complements Gordon’s score.” The Daily Harold

Paul Gordon’s chamber musical based on Jane Austen’s ubiquitous novel is full of wit and romance—and it is a winner. Mr. Gordon has put all the wit of Sense and Sensibility into his book and all the romance into his score, which is written in a contemporary-pop idiom that is disarmingly warm and lyrical. The eet, concise songs are woven into the fast-moving book--the result is a show as light on its feet as the novel from which it derives. Barbara Gaines has staged the dialogue scenes with rapturous sparkle, and Kevin Depinet’s set is as elegant as it should be. Look for Sense and Sensibility to be taken up by regional theaters. If you can’t sell tickets to a musical version of a Jane Austen novel—especially when it’s as winsome as this one—you’re in the wrong racket. Wall Street Journal

Happy endings for a world that could use more...Gordon’s latest crack at musicalizing Austen captivated me with its modest charm and wit..a highly clever adaptation. The tale of Elinor and Marianne Dashwood, two affectionate sisters of opposing temperaments who must learn to incorporate personality aspects of the other to realize their dreams of love, is hard to resist even. Romantic obstacles involving disparities of wealth and previous attachments create havoc for these marriageable young women, whose lives have taken a dif cult turn after the death of their father. With so much discord and chaos in the world today, it’s a relief to return to Austen’s more orderly universe, where matters of personal happiness—all that makes life truly worth living—are treated with the importance of grave national affairs.
The Los Angeles Times

“Lovely, just lovey! Want to fall in love this spring? Sense and Sensibility will sweep you off your feet. In a musical with plenty of men to swoon over, McGinnis and Rietkerk’s relationship is the true illustration of unconditional love. Under the masterful direction of Barbara Gaines, the ensemble flirt and zing with equal zest. The old-fashioned ideals are riddled with biting remarks. The comedy comes sophisticatedly wrapped in pretty paper and trimmed in lace. For such a familiar and traditional story, the play is peppered with the unexpected. Gordon’s script balances the formality of the era with an underlying passion. His dialogue is crisp and witty.”  The Fourth Walsh

“The production lingers like the lightest puff pastry, the buttery richness circumventing even café noisette.All of Jane Austen’s earthy passion, bubbling under societal strictures, is on display. Yet the swirl of Gordon’s unpretentious melodies married to harmonically complex underpinnings renders the affair as impressionistic as a Degas ballerina. Megan McGinnis’ Marianne spits wit and fire, then glows in contrition. Elinor must speak words unattached to her genuine emotions; Sharon Rietkerk’s portrait is the piece’s heart. If there is truth in the rumor that Paula Scrofano is retiring, we must cover the mirrors; she is at the height of her powers yet, her Mrs. Jennings all confounded flutter. Tiffany Scott is a wonderfully horrid Fanny; Scott and Helena Bonham Carter have never been seen in the same room. We loved Emily Berman’s Lucy Steele because we wanted so to slap her. Sean Allan Krill’s Colonel Brandon has only to enter, shouldering answerable grief, to have us all in hand, and by the time he’s finished the ballad, “Lydia,” no one can see the stage through their tears..”  New City Chicago

“This show will go far. All of us Austen fans will savor this retelling, and those new to the author will go along for the very enjoyable ride. Some of us will be going more than once to this dazzling charmer. The heart of this tale is the connection between the two girls, and it is so refreshing to see a story about women making their way in the world, even if it is a tightly constrained world with few choices for our protagonists. It’s a relief to attend a drama where the men are the supporting actors.”  Chicago Stage Standard

“This Chicago gem-of-a-theater and Artistic Director Barbara Gaines have outdone themselves. This musical adaptation of the novel by Jane Austen is perfectly cast with actors that embody the characters' “sensibilities” and bring the new music by Paul Gordon to brilliant life.  An enchantingly funny and striking night of theater, it will give theater-goers a spring in their step as they exit. Director Barbara Gaines and her team earn five stars for bringing a beloved novel to musical life.”  Examiner.com Chicago

“The music is incredible and only enhances Jane Austen’s classic story. Every piece is evocative and cinematic. Everyone will find a character to empathize with, whether it’s Brandon’s unrequited love, Elinor’s determined attitude, or even Mrs. Jennings’ love of gossip. Given Jane Austen’s reputation as a subversive and satirical writer, perhaps I should have anticipated the sharp wit and biting barbs thrown about. There is something magical about watching a musical live—Sense & Sensibility delivered.” Real Chicago